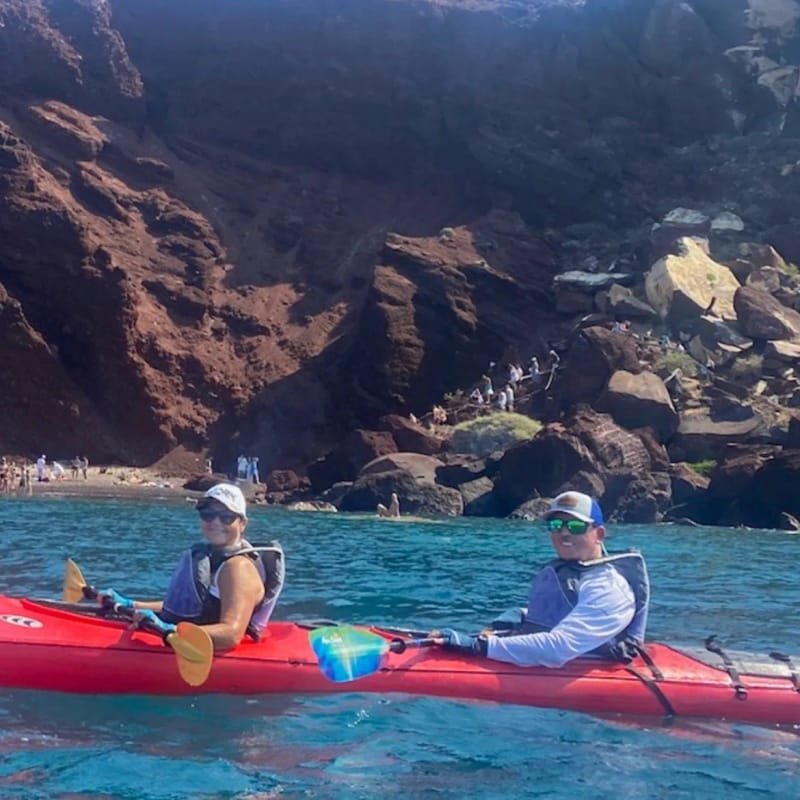 In case you’re planning a trip to Santorini, you’ll definitely want to see the southwest coast of this beautiful island by sea kayak.

There’s no better kayak tour company on Santorini to book with than Santorini Sea Kayak, located at Akrotiri Beach. Our guide, Adonis (who is also the owner) and his co-worker were awesome. Charles with Adonis (right) and co-worker

They were extremely attentive to our group's needs and concerns. They’re very knowledgeable of the history, the marine life, ecosystems and the waters off the southwest coast. Santorini Sea Kayaking has been awarded TripAdvisor's Certificate of Excellence every year since 2014.

After our fitting for life jackets, paddles and tandem sea kayaks, we received some instructions about paddling and hand signals. We were now ready to set out on our adventure.

It was amazing to see the many spectacular rock formations, the crystal clear waters of the Mediterranean and beautiful beaches in the south part of the island.

We paddled by Red Beach, which owes its name to the original colors of the steep cliffs created from volcanic lava. We also paddled to White Beach, whose high cliffs were as white as snow. These white cliffs surround a very small cove, even though the sand has black pebbles and grey volcanic sand. It creates an interesting contrast.

Besides visiting White Beach by kayak or boat, you can visit the beach on foot from nearby Kambia Beach. En route, we stopped near the entrance to the Volcanic Caldera for a light homemade picnic with some unique Greek snacks. We also had time to swim and snorkel, which gave us a brief break from kayaking. Charles and his wife enjoy sea kayaking off the coast of Santorini, Greece

The sea kayaking tour also took us into sea caves. The tour was approximately 3-4 hours, and we truly got to see much of the southwest coast of Santorini and test our paddling skills in various conditions.

Thankfully, I had my Tango 4-piece paddle and so didn’t experience any arm fatigue whatsoever.